Click here to become an Investor in LiquidPiston*
LPI IS HIRING! REFER AN OUTSTANDING ENGINEER AND RECEIVE $5,000!

Is the engine currently available for purchase?

How does the engine differ from a Wankel? 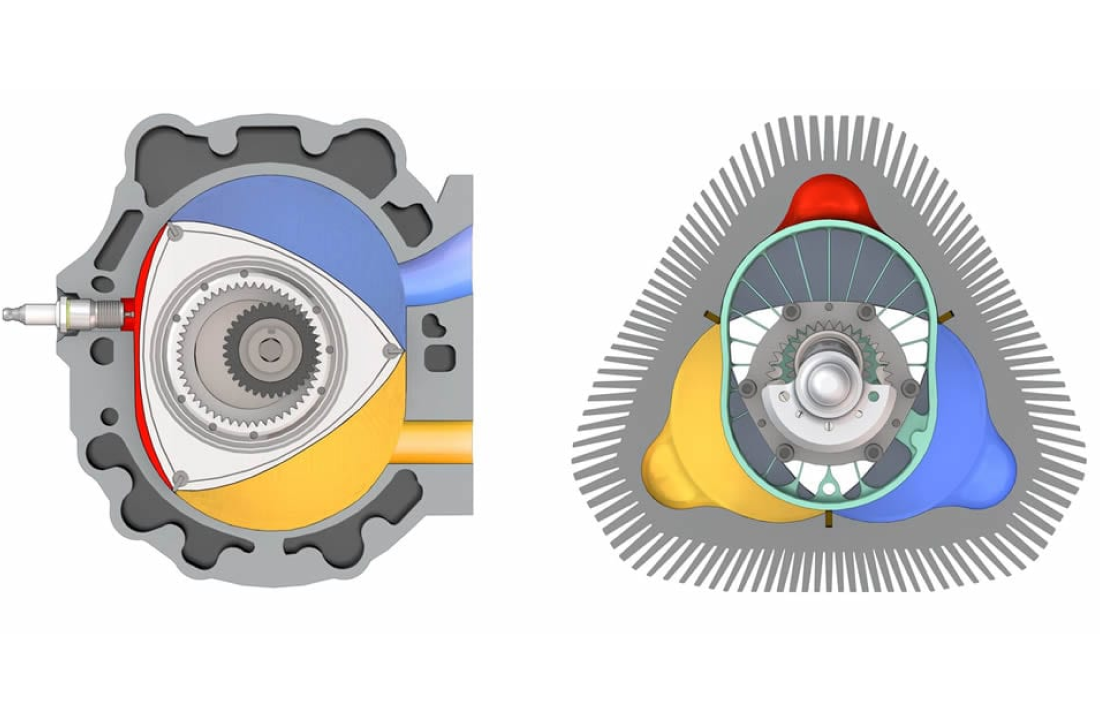 While it is a rotary engine, LiquidPiston’s X Engine is NOT a Wankel engine. It has a fundamentally different architecture and operation.
The Wankel rotary engine demonstrated excellent power to weight characteristics and exhibited low vibration even at high RPM. Despite these advantages, the Wankel was always plagued by poor fuel economy, emissions problems, and durability issues, especially in the apex / tip seals. These challenges are due to a number of inherent issues: 1) a narrow combustion chamber prevents adequate flame propagation, while also having high surface to volume ratio which cools the charge and reduces efficiency; 2) the engine is poorly sealed, leading to significant blowby, thereby decreasing efficiency; 3) the Wankel engine operates on the same conventional 4-stroke Otto cycle with spark ignition as a piston engine; however there are inherent challenges to operate > 10:1 compression ratio, and this engine was forced to compete with piston engines that had over one hundred years of prior development; and 4) the tip seals, in addition to being difficult to seal, are also difficult to lubricate; oil must be injected into the charge, with the majority of the oil burned in order to lubricate the gas seals.
‍
The ‘X’ engine essentially “inverts” the Wankel engine. While a Wankel engine has a 3-sided triangular rotor, within a 2-lobed oval housing, the X engine has a 2-lobed oval rotor in a 3-sided housing. The X engine captures the main advantages of the Wankel, including 1) high power-to-weight ratio [a one rotor X engine behaves like a 3-cylinder 4-stroke]; 2) simplicity – having only 2 moving parts – a rotor, and a shaft; and 3) like the Wankel - the X engine is inherently balanced with no oscillating components, therefore having minimal vibration. Unlike the Wankel however, there are several key differentiators which address the bulk of the older Wankel’s design deficiencies:

The apex seals of the X engine are located within the stationary housing, and do not move with the rotor. The seals do not experience centrifugal forces, and can be lubricated directly by metering small amounts of oil directly to the sealing surface through the housings, which means that oil consumption can be reduced to levels potentially comparable to that of a 4-stroke piston engine (essentially negligible).

LiquidPiston has a leading team of experts focused on rotary engine development. We are always interested in exceptional people. Please explore our job postings. If you would like to apply for one of the open positions, or to let us know how you can make a difference at LiquidPiston, please email your resume to hr@liquidpiston.com.

How can my company partner with LiquidPiston?

LiquidPiston is interested in speaking with potential industry partners regarding licensing the engine for specific market applications that require compact, lightweight, quiet, low-vibration, powerful, fuel-efficient engines. Ideal partners are current engine developers and manufacturers that are looking to expand their product lines.While we appreciate all of the interest we have received from folks that volunteer to test engine prototypes in various applications, we are not currently looking for help in this area. If you’re interested in discussing a partnership with LiquidPiston, please contact us.

What is the status of the engine development?

The X-Mini engine has gone through initial durability testing and has been tested in a customer prototype, which was demonstrated in an on-field application. X-Mini is going through continuous development for power, efficiency, and durability. The X4 engine has been tested on our dynamometers to develop high speed compression ignition strategies for all future LiquidPiston compression ignited engines. More information is available at X-Mini Engine and X-Engine Diesel.

What is the rated HP?

Is this engine scalable?

LiquidPiston’s engine technology can scale much like a piston engine, to serve applications down to 1HP, and to over 1,000 HP. Methods for scaling include: 1) changing the diameter of the rotor; 2) changing the width of the rotor; or 3) adding more rotors.

What is the RPM range?

What is the compression ratio?

For the X Mini 70 cc spark-ignited prototype, the compression ratio is 9:1. The diesel prototypes have operated at between 14:1 and 18:1, and should be able to go higher, to 25:1 or more.

Does the engine require side seals?

Yes, like any rotary engine. The difference in the X engine is the side seals can be lubricated through access points in the cover, which is a unique feature of this engine.

What is the difference between X4 and X-Mini?

Can the X-Mini engine be powered by natural gas (NG)?

Yes. Many gasoline engines can be converted to run on natural gas, including the X Mini. A natural gas X Mini would still be a spark-ignited (SI) engine.

How long would it take to design and build an X-style engine in a particular power range?

LiquidPiston has created the modeling tools required to optimize its engine development process, which reduces the time taken to go from concept-to-prototype. The design, fabrication and testing of the X-Mini 70 cc spark-ignited engine has taken approximately 1 year, whereas newer prototypes have been designed and tested in 8 months.

Want to hear from us?

Thank you! Your submission has been received!
Oops! Something went wrong while submitting the form.
Copyright 2022. All Rights Reserved.
*Become a shareholder in LiquidPiston! This investment is speculative, illiquid, and involves a high degree of risk, including the possible loss of your entire investment. For more information about this offering, please view LiquidPiston’s Offering Circular and Related Risks.